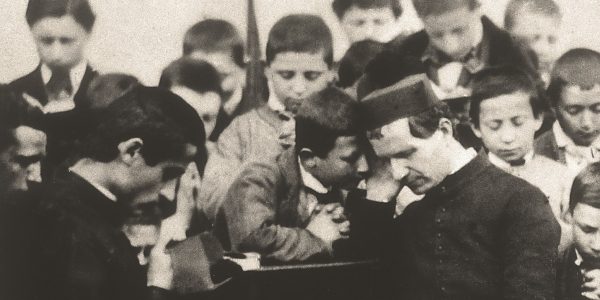 He was born on August 16th 1815, in a place called I Becchi, in Piemonte, a country house near the village of Castelnuovo, in the region of Asti. Piemonte was still an independent Kingdom and at that time Italy had not constituted the State of today, it’s capital was Turin.

John’s genitors, Francesco Bosco and Margherita Occhiena, were simple peasants who lived by what they produced from their work, they were strong believers, who truly trusted in the Divine Providence. When John was two years old his father died. His mother, with her confidence placed in God, faced the situation bravely, at a time when hunger was taking toll on the people and many were dying due to eating poisonous plants since they had nothing to eat. Mother Margherita was the person who mainly influenced John Bosco. A responsible person and full of affection, she educated her son whilst working hard to sustain the family conditions, she always shared with him the knowledge of God and had been always loving towards him and provided him with what was necessary. This way of living, trusting and acting in the time of any difficulty played a prime role in John’s good formation.

When he was nine years old he had a dream that impacted him for the rest of his life. In the dream he saw himself in a field, nearby his house, and there were some children playing and having fun. But among them were some who were insulting and fighting with each other. John approached them and tried to control the situation, and started yelling and punishing those who were misbehaving. Suddenly, Jesus appeared in the form of a beautiful man and said to him:

“Not by punishing, just by love and patience – that is what will make them yours and they shall become your friends. Then you will be able to teach them how to escape from sin and how to act with virtue.”

John, feeling troubled, responded saying that “an ignorant boy like him would not be able to educate those children”.

The man pointed out to a mistress who would be able to teach him obedience and the acknowledgement of true signs, and that person was Mary, his own mother. So Mary, showed him the group of children and said to him: “Here is your mission field. Be strong, humble, and robust”. John, still in the dream, started crying, he could not understand anything. So, Mary put her cloak over his head and said: “In the appropriate time you will understand everything”. Years later, as an adult, John Bosco relates this dream with his vocation to the education of the youth.

John Bosco took Saint Francis de Sales as his model of Christian life and master of spirituality. His way of being an apostolic zeal, inspired John and so he adopted it into his life and applied it into his mission of education to the needy youth from the suburbs of Turin. The salesian spirit lived by John Bosco is characterized by an optimistic and humanist view of education. Although it is difficult, every young person is able to grow and construct himself as person. It is the task of his educator to identify the right path to reach his heart and start imparting education. John Bosco was very attached to the importance of joyfulness. He sees in it the manifestation of the happiness of one who carries the Gospel of Jesus. What makes a real Christian is not the many recited prayers, but the joy that radiates from within the person who carries the treasure of the Gospel. For John Bosco, responsibility played a crucial role in life, advising people on many occasions, “to attain holiness one needs to start doing the daily things, fulfilling one’s own duties, in order to become good Christians and honest citizens”.

The presence of the Virgin Mary had a special place in the spirituality of John Bosco. He invoked her presence upon himself several times through the devotion of Mary, Help of Christians, for he was convinced of the maternal presence of Mary in all his work and mainly in his educational work in favor of the youth in great needs. He built a sanctuary in Turin in honor of Mary Help of Christians and also entrusted her the female religious institute that carries her name.

The educative style of John Bosco came from an assiduous way of coping with and a dialogue of the master with the youth. What facilitates the education of the youth and the sharing of values is the daily life lived constantly together. The Salesian education is performed first and foremost with friendship, from an affectionate and cordial dialogue. Punishments are senseless in the salesian way of education, it is from affection that one corrects and educates the person in his/her fullness, impacting one’s personality, integrating one into the society and in helping one’s openness towards what is transcendent. For John Bosco the sacrament of Eucharist and Reconciliation had a very important pedagogic value. The aim of education is “to reach holiness”, that is to arrive at the point of becoming authentic Christians; men and women who desire to live the Gospel each day with responsibility and joy, committed to a civil and ecclesial life.

His vocation to priesthood grew in him little by little. He observed around the streets priests from the villages who were committed with zeal in their tasks, nevertheless they did not have a familiar interaction with the youth. They only interacted with adults.

“If I were a priest, I would do it differently. I would get closer to kids and young people to talk with them and give them good advice.”

He met don Calosso, an elder priest of the neighboring village, when he was 14 years old. He found in him a good friend of the soul, who also became his spiritual advisor. Saint John opened up his heart to him. He taught him how to draw on the sacraments of the Eucharist and reconciliation, and to have time for prayer every day. These, thus became the basis of his spiritual formation. A year later, he started studying, but his friends were younger than him and so were more advanced in studies. His memory and his enlightened intelligence propelled him and few years later he acquired the proper level of his age. John became the leader of his school friends because of his sympathy, playful nature, his association with studies and honesty. He founded, with his friends, the society of happiness. This society had two rules:

When he was 20 years old, he finished school and pre-university studies. After this, he asked himself what to do in the future. He was sure of his vocation to priesthood, but where? As a diocesan priest or friar? After a time of reflection, he decided to join a franciscan convent in Chieri. He was very unquiet and his anxiousness made him have a dream on a certain night: a voice rebuked him “God is preparing you to a new harvest”. He asked a priest, who was sibling of a friend of his, what was that about. Years later he decided to join the diocesan seminary in Chieri.

During autumn of 1835, John Bosco wore the clergy cassock. On this occasion, his mother made him a reflection: “Dear John, it makes me happy that now you are wearing the priestly cassock, but remember it is not the cassock what will honor you rather your lifestyle. If on any occasion, you doubt your vocation, take off this piece of cloth before dishonoring it”.

The year 1841 was one of the most important in the life of John Bosco. He finished his studies in theology and was ordained a deacon on March 27 and soon a priest on June 5th during the feast of the Holy Trinity. He began later in this year, although in a timid proportion, the Salesian work. He made a life project in the days of his spiritual retreat that preceded his ordination: “A priest does not go to heaven or hell alone; he goes with the people he helped or the ones he drew to scandal. That’s why:

Don Bosco, Educator and Founder of a Religious Family

During 1846, he asked his mother to come with him to Turin. Also, he asked her if she could live with him to also be a mother to all the orphan kids. The kids were devoid of parents, love, and education. She accepted her son’s idea with availability and so moved with him to the house of Valdocco. Don Bosco, little by little started bringing some children into the little house, offering them a place to live. He gave them a bed and a plate, he searched jobs for them and during the evenings and holidays he taught them how to read and write. He also taught them religion. Furthermore, Margherita as a mother, washed and sew their clothes, gave them good advice, and was strict when necessary. The Pinardi little house became small. So, Don Bosco started building a church to have it aside from the house. After some time, he consecrated it to the apostolic model for the youth, Saint Francis of Sales. Years later, he had to build a bigger church, an authentic Marian sanctuary dedicated to Mary, Help of Christians.

Since 1849, Don Bosco gathered young adults as a custom, among whom he could see seeds of vocations to priesthood, and he prepared them,
leading them to share the educational responsibility of the oratories.
Many among them left, but many others stayed with him. On January 26 in 1854, he proposed four of them to go to a temporary experiment of pastoral and educational aspect under the advocation of Saint Francis of Sales, with the possibility of getting engaged in it later.

From that day onwards, the members of that group of servers started to be called as Salesians.

Father And Master of the Youth

Don Bosco remained active until the last moments of his life. In April, he visited Paris where he was received with the “fame” of a saint. In April 1886, he stayed an entire month in Barcelona, where he preached and healed many. The people there also recognized him as a saintly person. He died on January 31st 1888, in Turin, after staying in bed for a month, extremely tired. He consumed his life in favor of the working youth of Turin and of the world.

Don Bosco was declared saint by Pio XI in 1934. Throughout the years, Don Bosco has been venerated as a patron saint of professional formation and young apprentice of cinematography, as well as the patron saint of Brasilia and of Patagonia. He was declared Father and Master of the youth by John Paul II in 1988, on the centennial of his death.

Model for the Youth